Introducing the most exciting performance-focused catamaran to hit the sailing world, the Open Waters 40 is an all-electric catamaran that leverages the latest in yacht construction technologies designed to maximize the thrill of sailing yet still provide the creature comforts of a multihull.

The ESC40 is a 40-ft catamaran designed to be two to three times faster than the typical cruising cat – using carbon fibre to reduce weight and provide increased hull strength.

The twin helm stations are covered by a solar cell-covered roof and come with a 59m2 main sail in addition to three headsails: Jib 26 m², FRO 65 m² and Asail 121 m².

The hull is rated to handle boat speeds in excess of 20 knots. With curved retractable daggerboards providing better upwind handling and performance at speed.

The retractable rudders, together with the low draft of 2 ft, allow the boat to cruise in shallow waters and to be beached on the bow or stern. 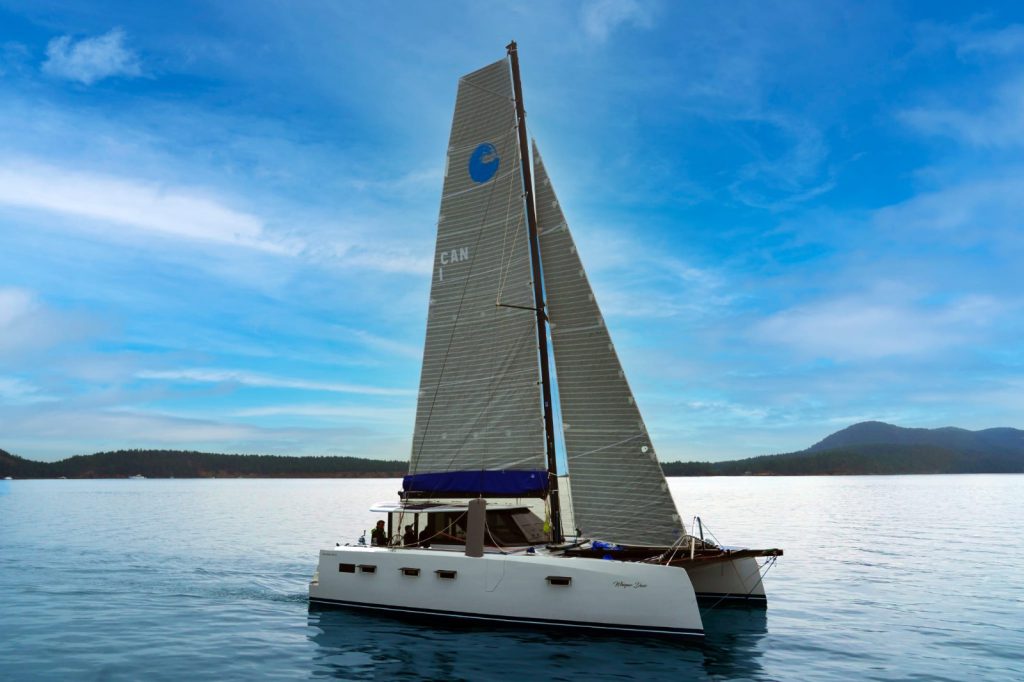 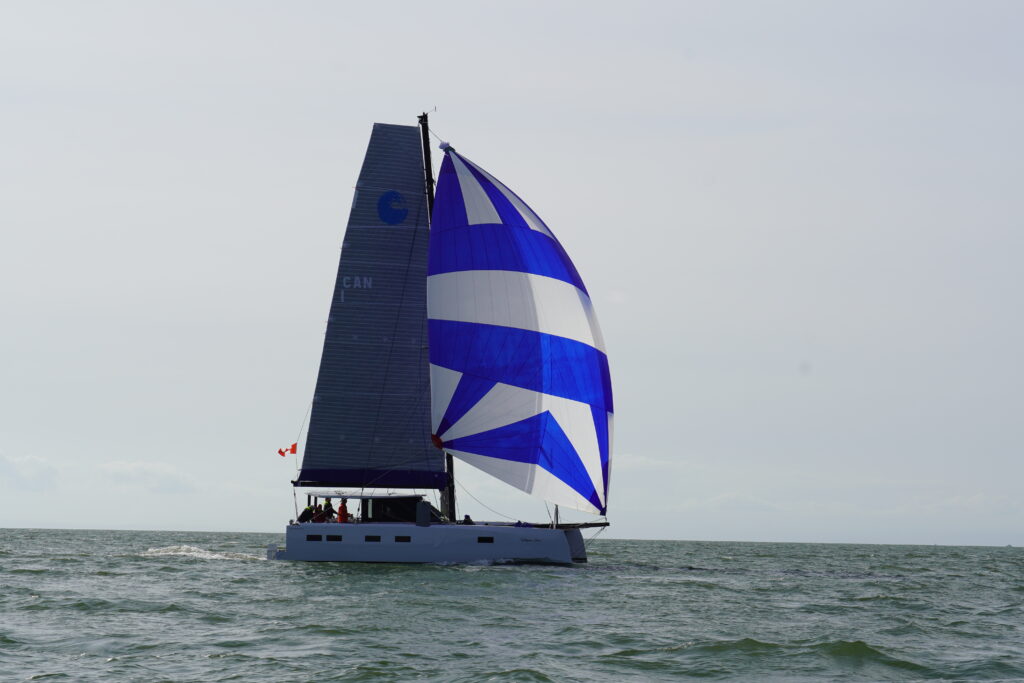 Thanks to the low weight, higher boat speed and the solar/hydro regeneration systems on-board. The boat is a 100% energy self-sufficient.

Using 10 kW motors, the close-quarter power and handling is unrivalled. The folding propeller generates electricity while sailing together with the roof-mounted solar cells, recharging the battery while in operation.

The boat comfortably accommodates four adults and two children, and is sure to bring you all modern comforts such as a 400L water reserve shower and an electric stove.

The hull interior boasts 6’4” of head room with the coach offering even more generous space with 6’8” of head room up to 7 at the aft dinette. The wet deck, spacious with 300 ft² between hulls features the main stateroom.

Each hull features three deck hatches and six portlights for excellent ventilation while the trampoline across the beam is 305 ft² of play, relaxation and dolphin viewing.

Our unique construction techniques allows us to manufacture the boat in Canada in a quarter of the time compared to traditional boat building.

We can also build and ship your boat in as early as four months, greatly surpassing the industry standard of 12+ months.

From order to build and delivery, our price compares very favourable to other fast cats.

The boat can be packed in a standard 40ft freight container and be shipped safely anywhere in the world at a much lower cost (up to $50,000 savings) and in a fraction of the time.

Boat owners can now also ship their boat one or both ways between North America, the South Pacific, Mediterranean or the Carribean for a one way cruise or an overwintering. 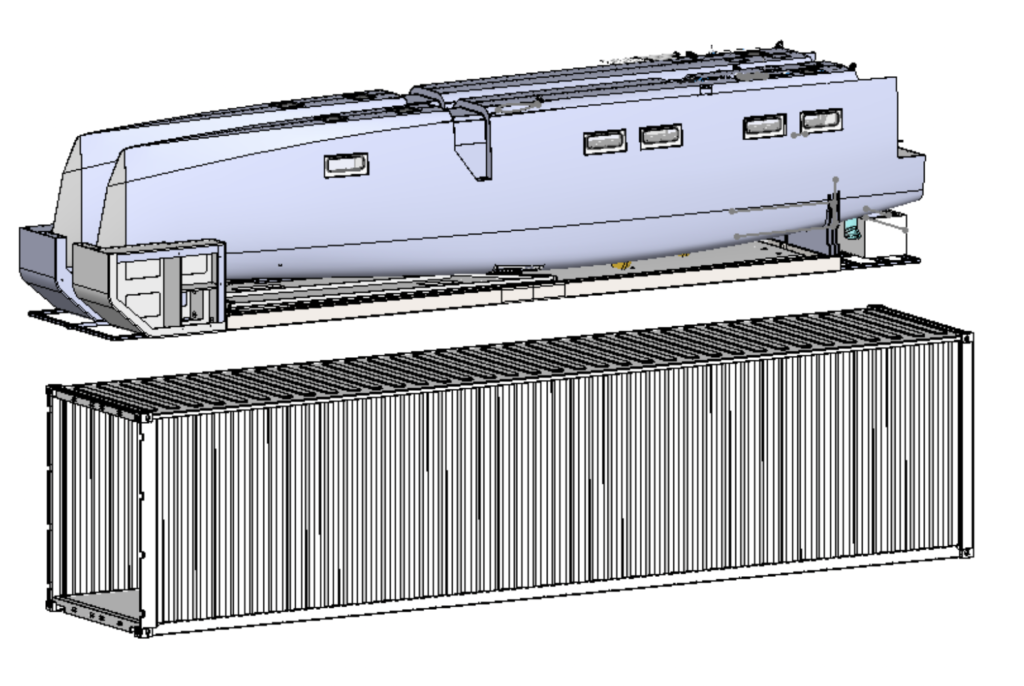 Vacuum resin infusion is the process at the heart of our technology and is used for all parts.

The vacuum resin process removes all of the air between the fibres of a part prior to the introduction of the resin.

After the process, our parts are meticulously sanded with variable grit — allowing for maximum paint adhesion on surfaces and smooth, stylish edges.

Core materials are introduced into the part to increase stiffness without increasing weight.

The core is a structural-grade foam with a high shear strength characteristic: if the part is of a complex shape, we cut the foam into sections, thermoforming it to the required shape.

We use five different sizes and densities of foam on the boat, optimized for local strength requirements.

We purchase carbon fiber by the roll and over 35 rolls are used in each boat. We have engineered the laminate schedule to be most efficient in the various areas of the boat maximising strength and reducing weight.

Each meant to be the most efficient for their respective areas. The fabrics are stitched, instead of weaved.

Stitched fabrics do not need to bend over or under other fibre and lay flat, making a stronger part.

At Open Waters, it is our mission to make catamaran cruising more exciting and environmentally sustainable. We’ve set out to create a performance cruising catamaran that will be a joy to sail and that will raise the bar in environmental sustainability.

We have developed a unique  design and manufacturing process, selected high performance  materials that enable us to build a boat that uses less materials and is 50% lighter. As a result it is a lot faster and as a result it is able to generate and store the energy needed to propel it electrically for hours and provide enough energy for on board equipment.

We use high performance carbon fibre and a vacuum infusion process to maximize strength and reduce the use of resin and eliminate resin vapour emissions. We use 100% recycled PET foam core wherever possible and we see the opportunity for incremental use of bio-based epoxy and natural fibres in our future.

As we continue to develop our sustainability roadmap for our boats we will perform a full lifecycle analysis to identify other opportunities to minimize our carbon footprint.

The unique processes and skills we have developed can be applied and licensed to other marine and recreational vehicles businesses.

Simon Angus P.Eng is a professional mechanical engineer with a background in project management and a passion for sailing.

He spent his university summers travelling around Europe searching for the best combination of wind and waves in addition to teaching both sailing and windsurfing.

After moving to Canada in 2004, Simon bought a Catalina 27 in Kitimat BC and enjoyed sailing in the Douglas channel with his young family. A career move to Alberta paused his sailing career until he found the joys of chartering sailboats in the Caribbean.

After a 20 year career in industrial engineering and project management he decided to make a change and combined his passion and profession to launch Open Waters Design and Manufacturing in 2016.

After researching the various build steps, Simon started with CNC shaping of a plug, hand finishing and building the hull molds. He also built the mast, Z foils and the Tee foil rudders. After successful trials in Vancouver BC, Simon then set out on his next ambitious project, to design and build the boat he had dreamt about for years.

A boat that could be shipped anywhere in the world, sail on with his family and returned to Vancouver for summer cruising and would be electrically sustainable.

Simon was introduced to Hal Whitacre in 2019 which started a design relationship that has resulted in the creation of the Open Waters ESC40. 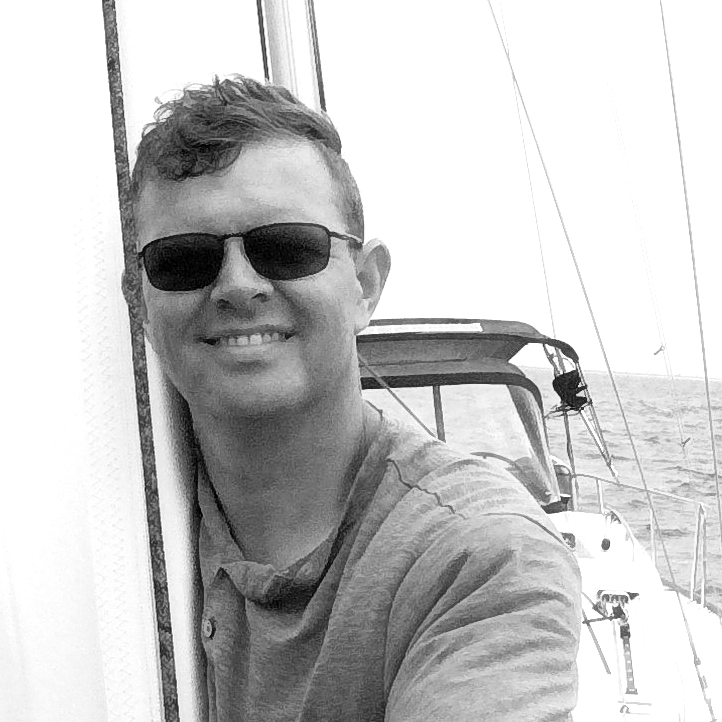 Hal Whitacre, owner of Whitacre yacht design since 1984 and is responsible for some of the fastest and most luxurious boats ever built.

Hal is Open Waters Chief Naval Architect and has worked closely with Simon over the past 2 years to produce the detailed designs that make up the Open Waters ESC 40.

Hal has a distinguished career in Naval Architecture graduating from the University of Michigan with a degree in Naval architecture and Marine Engineering.

Throughout his career he has pushed the boundaries of naval architecture notably designing the Open Class 60 “Imagine”; breaking ground with the largest rig ever put on an Open 60.

Hal also owns and operates Bruce Roberts USA and in that capacity, he has designed over 100 steel and aluminium boat kits in addition to many fiberglass and  wood sail and power boats. Most recently, Hal was the chief Naval Architect for Gunboat Catamarans when they were built in the USA.

Since their move to Europe, Hal has completed 2 gunboat 55’s along with a conversation of a gunboat 55 to a powercat ferry which has recently conducted successful sea trials.

Hal and his wife Tammy split their time between Annapolis, Md and Sister Bay, Wi.  Hal continues to race Lasers during the winter and windsurfs/foilsurfs as much as possible.

Join us on our mission to make catamaran cruising more exciting and environmentally sustainable.

You are well versed and have experience in nearly everything digital marketing. You’ve either grown up boating, lived the life of a cruiser, traveler, racer or practice an other lifestyle action sport and know what makes people tick. You’re an avid content creator and storyteller and you can work your magic with the tools of the trade. Lights, camera, sounds, action.

Join us for a seamless blend of work and play as we test and trial the boat, document BC cruising experiences and host prospective customers from around the world. While a lot of time is spent on the boat you’ll also be responsible for the creation, editing and delivery of all digital content via influencers, communities, social and traditional media and marketing channels.

If this sounds like you, please email me at simon@openwatersyachts.com tell me why you’d love to join us in BC this summer and include a few links to the amazing content you’ve created and shared. I look forward to our chat.